Tense (noun)* = a distinction of form in a verb to express distinctions of time or duration of the action or state it denotes.

Don’t be scared I’m not all of a sudden going to start teaching English grammar. I have been noticing something in the books I have been reading. I’d list them but you know I’m trying to be friendly with your time. Either way the credit goes to several authors that have inspired me to write this post. What I noticed is the way they speak about their goals and the instructions they give on how to write your goals. Not just in the words they use, but more specifically the verb tenses they use. It is exactly here where the definition of the word tense becomes important to know. There’s always a point to me sharing a definition!

Recommended: The Power Of Words

How The Guru’s Use Verb Tenses For Their Goals

Quite literally they say to think of your goals as already accomplished and sequentially to write your goals as already accomplished. The verb tenses they then use to describe their dreams are all past tense. Let me give you an example: let’s say I am making a goal plan and I have decided to really once and for all test my lungs and go run a marathon. For those of you who don’t know I have asthma, which could be a minor problem depending on how much training time and hospital visits I get. That aside, there are now several ways I could write this goal down on my goal list using several verb tenses:

Minor grammar lesson coming your way, sorry! The first sentence is using the present tense while speaking about the future. It in this case it is showing an intention. However the construction with ”going to” can also be used for a prediction. In my opinion you can make a case for both uses for sentence number one, so I am going to leave that in the middle. The important part is that the verb tense used here is the present tense.

In the second sentence the simple future tense is used, which doesn’t have any extra if’s and/or but’s to mention in terms of grammar rules that are relevant at the moment. It is clear that this one is used for something you intent to do or have happen in the future, hence the simple ”future” tense.

The third and last sentence is written in the simple past tense. You are speaking and/or writing about something that has already happened. This is the construction that the guru’s use when describing their goals. They write their goal plans with their goals in past tense to indicate that it has already happened, even though in current reality it hasn’t. It is said to help you see yourself living the dream.

Grammar is never as easy as it seems

This makes all the sense in the world at first glance, but it also implies that the way you describe your dream when thinking about it has to change. It has to change because you actually have to believe that it works. It being thinking of your dreams as already accomplished. Believing is a major key (I will go into this at a later time). Just writing down your goals and dreams using the past tense is not enough. Your entire belief system has to go along with the double thinking of yes I have not accomplished my goals yet, but I am writing as if I did.

This reminds me of what happened when I made my life plan, remember that I got stuck? I couldn’t answer the question of what I wanted my life to do with my life. I even tried multiple versions of the same question. In all of the questions I was using the present tense and my mind was stuck on intense silence. When I reversed the question as if looking back on my life the answers poured out of me. I had to write as fast as I was thinking.

Recommended: How I Created A Life Plan To Write A Life Story I Love

The Why Behind Using Verbs in Past Tense

When you know what it is you want to have accomplished at the end of the road it becomes easier to see what it is you effectively need to do. There’s this theory that your mind sees only the things that you focus on. At first glance I, as I imagine you are too, thought ‘’Well, yeah of course! That’s just common sense.’’ However it goes deeper than that. Your mind will see opportunities, find chances and create ideas in order to comply with what you are telling it. So when you are speaking of a dream in verb tenses that imply its completion your mind will be programmed to this believe. Thus the focus of the mind will be on all that complies with your dreams. See, it goes deeper than you’d think.

Problems With This Verb Tenses Use For Your Goals Theory

The above stated is true. What you tell your mind often enough it will begin to believe. There is a plethora of academic research proving this. However there is also where the problems begin. When you use verb tenses that imply something is already done, your mind might believe you and move an unaccomplished goal to the goal list of ”goals accomplished”. I think I am being captain obvious here but that is problematic, for the obvious reason that you have not actually completed your goal yet.

Another issue that might work out terribly is sort of proven theory of what happens when you tell people your goals. There’s research done by Peter Gollwitzer and his team that basically concludes that when you tell people your intentions and goals you are less likely to do them. This theory has been gaining traction the last years, as I have seen it pop-up in numerous magazines, here’s an example.

I have to say that Mr. Gollwitzer and his research team specifically speak about telling other people your goals and that makes you less likely to act on them. I can’t help but ask the question of what happens when you are solely telling yourself by writing your goals down, reading them to yourself over and over as is recommended by the guru’s and also using past tense for the entire time. There might not be a connection, but I think it is definitely food for thought.

It’s definitely a theory to look into further. Personally I feel that going forward by working backwards is a tactic that works. I have my life plan and vision boards as proof. However I did write those in present tense and converted them in past tense when they were actually done. The why behind using this theory does speak to me and has actual value and merit however there are certain wonders that also need answering such as could this be a key to motivation and/or to solving obstacles. For example the obstacle of not knowing what to do as I with my life plan.

You also have to let weigh in the fact that the people that got me researching this are not called guru’s for nothing, though this doesn’t mean that we should follow blindly. You need to wonder about it for yourself. What do you think? Are you going to follow the guru’s advice and write your life goals in the past tense?

It appears that we not only need to mind the words we use but also the verb tenses we use. 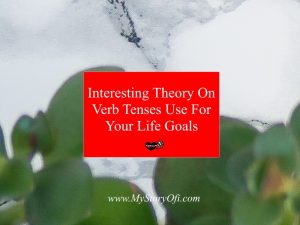 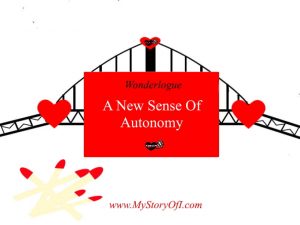 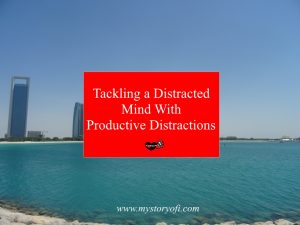